My eyewitness account of police repression last night in São Paulo, originally posted at Brasil Wire. Photography is mine, with additional photo & video in a separate post.

Pro-democracy protestors have demonstrated through the streets of São Paulo for four consecutive nights now. All have terminated with military police aggressively dispersing crowds numbering from the low thousands to up to 30,000. Thursday’s protests (1 September), however, saw a remarkable and disproportionate level of police mobilisation and coordination that sounds an ominous note in advance of another, larger, protest schedule for Sunday (4 September).

Spurred by the final act and consumation of Dilma Rousseff’s impeachment, the quasi-spontaneous protests have demanded the ouster of the ‘usurper’ Michel Temer, Dilma’s former vice-president and turncoat. Organised via Facebook, the manifestations have been called by various social movements. But lacking participation of unions or the more organised social movements of landless or homeless, the protests have been mostly young, consisting of students and the activist left.

Thursday night’s scenes should be viewed in the context of the previous nights. All protests began on the city’s main business avenue, Avenida Paulista, as of 1800. Monday’s was repressed and dispersed there by 20h30.

Tuesday’s much smaller protest was unilaterally attacked by police and forcibly dispersed near Largo do Arouche while en route to Folha de S. Paulonewspaper headquarters. Wednesday’s significantly larger crowd was attacked without provocation on Avenida Consolação, as detailed in this Brasil Wire film.

Thursday however saw an altogether different police strategy, whose motives remain unclear. Perhaps anticipating a larger turnout angered by the previous night’s aggressive and one-sided ‘policing’, police presence was already exaggeratedly large on Paulista in the early evening. The original route was to march through the adjoining wealthy neighbourhood of Jardins, which then changed objective to PMDB headquarters in Paraíso. Determined to prevent either, police kettled protesters — by now numbering only 2,000 — on Paulista for an hour or more, under the gaze of mounted police and riot squads. 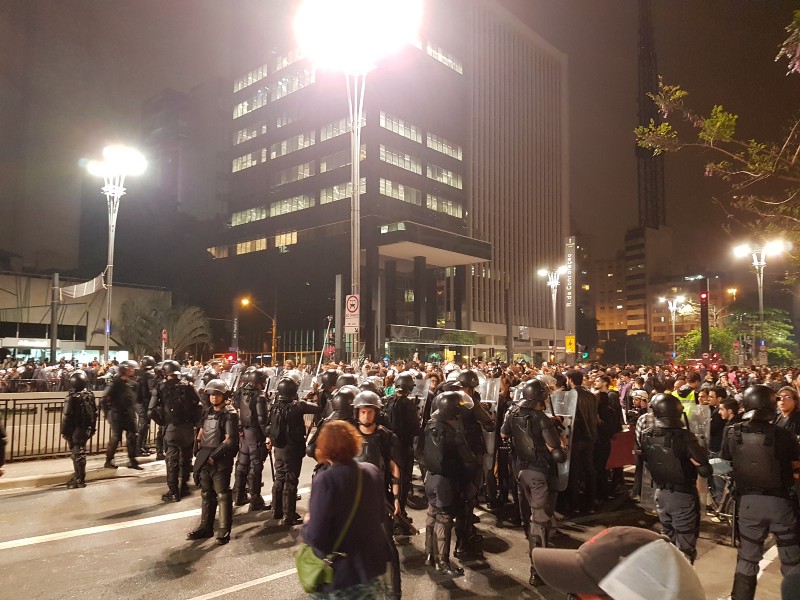 Finally, protesters were funnelled towards one lane of Consolação towards the centre. What ensued can only be described as an officious and highly choreographed police escort. Regular miliary police in riot gear and fully kitted-out shock troops on foot, police on motorbikes, in SUVs, and in armoured riot vehicles accompanied protesters into the centre. Nearly every side street was blockaded by riot police. As protesters continued down towards the centre, police enacted what appeared to be a military exercise, with motorbikes and other vehicles zipping up and down the road, relieving one another at checkpoints and marching in formation alongside protesters.

The otherwise deserted streets resounded to the noise of police helicopters above, buzzing police vehicles and chants from the protesters. At the front of this cortege were the only ‘civilians’ who looked ready for the foretold combat: an advance group of twenty photographers sensibly equiped with helmets, eye protection and gas masks.

It was an absurd spectacle. Had there been film crews and canvas chairs alongside the road, it might have provided a more logical explanation for the scenes: it was a big budget cinematic production.

Speculation that this oppressive chaperoning was a just a means of taking the protesters somewhere more out of sight instead proved correct, as the caravan moved through the down-at-heel centre down to narrow, empty streets near the Vale de Anhangabaú. There on Rua João Adolfo, the forces of order closed off the back of the protest and comenced the predictable firing sound bombs and tear gas into the protesters, who then dispersed throughout the area.

Folha de São Paulo newspaper cited as cause for police intervention the fact protesters had armed themselves by taking rocks from a dumpster. This a few did, but not a rock was thrown before police attacked. In fact, given the careful police coordination of the route, with plenty of advance batallions, it is remarkable that police did not seek to isolate the dumpster, instead conveying protesters right past it on a narrow street.

Long after dispersal, more sound bombs went off on deserted Praça Roosevelt, some 800 metres away, doing little more than frighten ordinary people frequenting bars on an adjoing street. This, to its credit, was reported by Folha, as well as substantiated by independent media at the time.

Why the overwhelming police presence and military organisation for a small and non-threatening protest? By the end, the ratio of demonstrators to police must have been only 2:1.

There are four possibilities: the mobilisation was precautionary, albeit excessivley so; it was a show of force; it was an attempt to demoralise protesters through tight control; or it was an opportunity to rehearse for later occasions — effectively a military training exercise.

The multi-modal, full-spectrum ‘riot control’, and the firing at empty space well after the protests had ended, suggests the latter may be at play.

Sunday will see another protest on Avenida Paulista, which is always closed to traffic on that day. The Secretary of Public Safety of the city has banned the protest citing the passing of the Paralympic torch that afternoon on the thouroughfare. Meanwhile, President Temer has approved military presence then too. This galls because of the accomodating attitude of authorities to pro-impeachment protests — such as making the metro free on occasion of the latter. Protest organisers have emphasised that they seek no disruption to the passing of the torch and have maintained the start of the protest for after the event.

In any case, the stage for confrontation has been set by the authorities. Days of one-sided provocation and a hightened security presence seemingly eager to make use of their expensive toys augers poorly for the weekend. The media plays its role too, concocting casus belli, such as exaggerting black bloc involvment. An editorial in Friday’s Folha calls these groups ‘fascist’ and risibly suggests that democratic societies that fail to crack down on protests are fated to turn out like the Weimar Republic. Another editorial in Estadão also calls for repression of protests.

If protests against the illegitimate removal of President Dilma and the right-wing agenda of Temer are to prove effective, however, progressive forces will require much more significant mobilisation — as well as intelligent tactics — for protests to move beyond the predictable and lamentable cycle of victimisation.

[Update: Thanks to the intervention of São Paulo mayor Fernando Haddad, Sunday’s protest will be permitted, from 1630 onwards, allowing for the ‘safe passage’ of the Paralympic torch.]

3 thoughts on “Repression of pro-democracy protests”