It is one year to the day since ISIS claimed responsibility for the Paris attacks, in which they “targeted the capital of abominations and perversion.”

What followed was the predictable Je Suis Charlie-style demonstrations of ‘solidarity’ – so patently a charade when voiced by authoritarian, militarist, and censorious European leaders. Others repeated the French Republican trinity of liberté, egalité, fraternité, but – at the risk of being ungenerous – did it maybe sound hollow? Where is the commitment to these ideals: not just a defence of the liberal achievements of the past, but their continued realisation and advance into the future?

The literal and symbolic targets of the attacks were people, especially the young, enjoying themselves, mixing with one another, watching football or attending a gig (“idolaters participating in a party of perversity” according to the ISIS statement). One might suggest that even (especially?) in a post-heroic age, footballers and rock stars remain better idols than any god you care to mention.

This is something the Marquis de Sade knew, as he wrote in the years immediately following the French Revolution. France was slipping back into the dark days, and a fully fledged libertine atheism was required to rid the country of vestiges of religiosity. The future of Europe was at stake. In a pamphlet entitled “Yet Another Effort, Frenchmen, If You Would Become Republicans!” from de Sade’s Philosophy in the Bedroom, the author spelled out the new spirit required. Here I quote selectively from it.

Let the slave of a crowned brigand grovel, if he pleases, at the feet of a plaster image; such an object is readymade for his soul of mud. He who can serve kings must adore gods; but we, Frenchmen, but we, my fellow countrymen, we, rather than once more crawl beneath such contemptible traces, we would die a thousand times over rather than abase ourselves anew! Since we believe a cult necessary, let us imitate the Romans: actions, passions, heroes – those were the objects of their respect. Idols of this sort elevated the soul, electrified it, and more: they communicated to the spirit the virtues of the respected being. Minerva’s devotee coveted wisdom. Courage found its abode in his heart who worshiped Mars. Not a single one of that great people’s gods was deprived of energy; all of them infused into the spirit of him who venerated them the fire with which they were themselves ablaze; and each Roman hoped someday to be himself worshiped, each aspired to become as great at least as the deity he took for a model.

Here we have an almost Sartrean suggestion that each individual has a responsibility to live as an example of freedom to others.

It is no longer before the knees of either an imaginary being or a vile impostor a republican must prostrate himself; his only gods must now be courage and liberty.

When nihilist terror attacks flagrant demonstrations of pleasure in the streets, in stadia, in bars, in clubs… our response should be to have the courage to live life publicly, without fear of the Other or one another.

De Sade explained that prostration to religion came from fear:

Man’s uncertainty with respect to his god is, precisely, the cause for his attachment to religion. Man’s fear in dark places is as much physical as moral; fear becomes habitual in him, and is changed into need: he would believe he were lacking something even were he to have nothing more to hope for or dread.

And if we give into fear…?

They will rebuild upon these foundations, and will set thereupon the same colossi, with this difference, and it will be a cruel one: the new structures will be cemented with such strength that neither your generation nor ensuing ones will avail against them.

Of course, it is not religion that oppresses Europe today. It is fear – an abjection in the face of nihilist terror, and of our own leaders who would seek to terrorise us. The imperative – the effort to be truly republican – must be rejection of facile and cowardly exits. Neither the neoconservative lashing-out at phantasmic enemies, nor pusillanimous post-liberal mea culpas in the face of reaction. 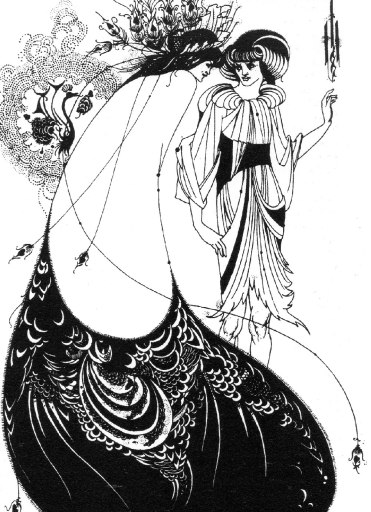 The response to the Paris attacks a year on should be cocksure.There should be no assent to fences and frisks and metal detectors. The tumult of 2016 has left us with even less to which to cling. Whatever other political struggles may be required, a joyous, libertine, arrogant filling of public squares must be an essential part. All our cities should be capitals of abominations and perversion.

Let the most insulting blasphemy, the most atheistic works next be fully and openly authorised, in order to complete the extirpation from the human heart and memory of those appalling pastimes of our childhood.

The featured image at top is Umberto Boccioni’s The Street Enters The House (1911). Above is Aubrey Beardsley’s The Peacock Skirt (1893), created for Oscar Wilde’s Salomé, depicting the latter as a confident, sexually charged ‘New Woman’.